Campaign Champions reflect on their visit to COP26 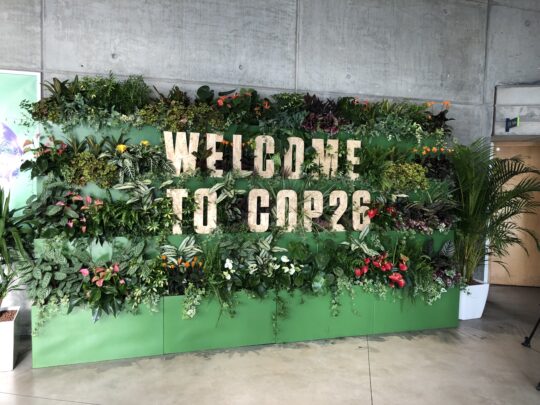 This year at Send My Friend to School, we had the incredible opportunity of taking our Campaign Champions to Glasgow to participate in the COP26 Summit. The majority of our young campaigners have been campaigning on global education for two years. As part of the 2021 Education Interrupted campaign, and leading up to t0 COP26, they focused on the ‘Right Climate to Learn’ – highlighting the impact climate change has had on education globally. The UN climate conference presented a unique opportunity for our campaigners to engage, debate and discuss with high-level ministers, delegates from the global south and other young people also campaigning for climate action. Below are Parveen and Finn’s reflections and insights on their time at COP26. 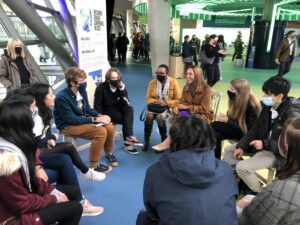 We’re lucky to be some of the few youth representatives allowed into COP26. Our aim was to highlight the impact of the climate crisis on global education, and how global education is an effective tool to tackle climate change. The experience was nothing short of incredible, in more ways than you’d think; whilst the experience of talking to politicians was very inspiring, particularly in the case of Shirley-Ann Sommerville and her keen words about amplifying the youth voice in democracy, perhaps the most long lasting memory I will take away is the disparity between inside and outside COP.

Inside, we were expecting to find an abundance of like-minded activists exchanging ideas, an ever more powerful collective pushing for change. Whilst some of this was happening, the change supposed to happen at COP was dwarfed by multinationals on corporate greenwashing ventures. Meanwhile, outside the security fences were the likes of Greta Thunberg, rallying the youth into mass protests and trying to do her utmost to elevate the youth voice onto the world stage.

Within the Green Zone, we were incredibly fortunate to hear the story of Margaret, a small-scale farmer from Uganda who is currently working with the Oxfam delegation at COP. Her story of how life has already changed from her parents and grandparents generation was shocking. She detailed how she is living with the effects of climate change right now, and how things need to change immediately if her children are to be able to grow and harvest the food that they rely on. She said “As I talk now, this is meant to be the month when there is a dry spell, when people are harvesting. But when I called home, they said that there is too much rain, meaning that again, as we talk here, massive destruction in my region”. Inside COP, this message felt lost within the stalls highlighting corporate ventures and seemingly in the negotiations in the detached Blue Zone over the river, which was sadly out of bounds. This lack of discourse between the negotiators and change-makers creates a division that hinders the ability for solutions to problems and causes to be realised – this is something that I would like to help bridge in my campaigning.

We also met Pushpanath Krishnamurthy, one of the most remarkable people I’ve ever met, who seamlessly manages to be so positive in the face of the climate crisis that he fights against. Along with Push’s positivity and Margaret’s experiences, we took what we had learnt  into our conversations with Shirley-Ann Sommerville, Helen Grant and Alicia Herbert. This technique of learning and then applying experiences was whilst being very enriching, it was also incredibly fun.

COP26 has had a profound impact on me and I will take this experience, and use it as inspiration in my own campaigning going on into the future, thanks entirely to the diligence of John McLaverty, Hannah Nixon and Ayesha Farah at Send my Friend. It’s impossible not to be inspired by Miss Shah, my teacher at school, due to her relentless work ethic to give everyone the best possible opportunity at school. Overall, I would like to thank everybody, the politicians, my fellow campaign champions, activists, etc, for helping me grow and to be ever more passionate about what I believe in. My experience as a campaign champion is something I’ll never forget. 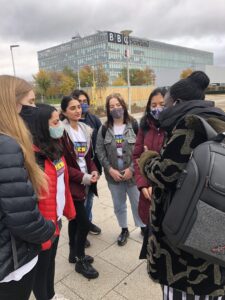 COP26 was an incredibly inspiring and educational opportunity and I wanted to share some the things I got to experience and learn:

Firstly, we received some preparation by going through public speaking techniques and receiving details for the day ahead. Then we set off inside the Green Zone after intense security checks!

The very first person we met was climate activist Pushpanath Krishnamurthy (Push) who walked 400 miles all the way to COP26 to carry the message of climate change, particularly for those who are already the hardest hit. We also got to meet Margaret, a farmer from Uganda who shared her story first-hand of the impacts of climate change she herself has witnessed over the years: farming; the industry which relies on the stability of the seasons to cultivate crops now deals with erratic conditions due to climate change such as frequent droughts, that render it almost impossible to grow anything. She worried the most about the future of her children who were around the same age as us. Her story is one that is shared by many others, saying that climate change isn’t just something to worry about for the future, it is the shared reality of people right now and highlights the urgency of the situation.

We then went into the section where other organisations put up stalls for their own campaigns. I particularly remember one stall run by the British Lung Foundation and Asthma UK about trying to lower the level of pollution within London. They said the guidelines set by the WHO were still not mirrored within UK law. I brought up in conversation a news article about a 9-year-old girl in London whose cause of death was officially listed as pollution. She suffered a series of severe asthma attacks that over the course of three years that coincided with the illegal levels of pollution. They then directed me towards a painting that had been commissioned by her mother in her memory. This girl lives in the same city as me and I am breathing the very same polluted air; it must be having a similar effect on my body as well?

We also had the opportunity to meet other politicians such as Shirley Ann Sommerville, Minister of Education for Scotland. It was extremely interesting to see how the Scottish education system worked without a strict national curriculum and how as a nation they encouraged the youth voice all the way from school to politics (for example, giving young people the vote at 16). We also had the opportunity to hold other leaders to account such as: Alicia Herbert, FCDO Director of Gender Equalities and Helen Grant, PM’s special envoy for girls’ education, and Jamie Livingstone, Head of the COP26 Oxfam Delegation. I had a very interesting conversation with Jamie where he told me that the inaccessibility to the world leaders and negotiators wasn’t just felt by the young people but even leaders of well-known organisations. There is still a lot to be done in terms of listening to the wishes of the general public and I feel like the goals made at the end of COP spoke to that distance. We also had a briefly got to see Nicola Sturgeon, First Minister of Scotland and Ed Davy, Leader of the Liberal Democrats. The day left on a high note where we managed to network with other youth activists from around the UK and hopefully will get in touch with them soon!

I realised that it was clear that the campaigning didn’t end once I stepped out of COP – it is something that we as a collective need to continue to do for the years to come to make sure that the promises and pledges made are still being kept and that we can continue to place pressure onto leaders, holding them to account to create a world that limits global warming and cares for our planet.