Report back: Campaign Champions speak alongside Julia Gillard at Parliamentary Event on Education. 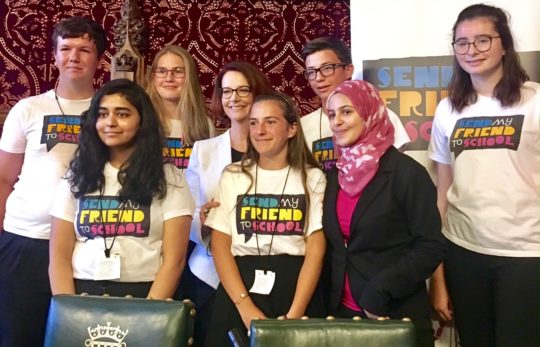 My name is Lucy Owen, and I am a ‘Campaign Champion’ for Send My Friend To School. I am fifteen years old and from St Phillip Howard School in West Sussex.

This week myself and 5 other ‘Campaign Champions’ travelled to Parliament, to attend an All Party Parliamentary Group For Global Education event. Like an ‘after-school club for MPs’, an APPG is a cross-party group of MPs, who work together to support a particular issue they have a special interest in.

Steven Twigg, (an MP who is also Chair of the International Development Committee and the APPG for Global Education) opened the event. He described the work he does in his roles, and confirmed that despite the snap election, the IDC was going to continue writing their report looking into education around the world; good news for everyone striving for global education!

Then Julia Gillard, former Prime Minister of Australia, Chair of the Board of Directors for GPE (Global Partnership for Education), and the principle speaker at the event, spoke detailing how she and GPE were fighting for the universal education that she said was “ultimately for global peace and prosperity”. This was particularly exciting for everyone at SMF, because the main aim of our campaign this year is persuading the UK Government to donate more of our aid budget (we’re asking for £500 million dollars) to GPE. The partnership allocates the aid to where it is most effective around the world, and creates “solidarity between all countries” according to Julia Gillard. I really enjoyed hearing, and felt inspired by, what she had to say.

The audience (which included many MPs, academics and other people involved in the struggle for education) then heard from the rest of the panel. Muzoon Almellehan, a Syrian refugee who now lives in the U.K, gave a moving and eloquent speech, mentioning that “education gave me hope and made me stronger”. Then we heard from 2 of my fellow Campaign Champions, who spoke brilliantly about the campaigning we have done together. Something I particularly liked that they said was that “education is a human right. This right is universal not geographical” which I thought summed up the drive and passion given by everyone to “ensure that no one is left behind” in the words of Anna French, Head of Education at the Department for International Development, who also spoke on the panel.

After the event, we had an opportunity to speak personally to the panellists and also to the MPs, to try and persuade them to join the Global Education APPG. It was a fantastic experience to hear these influential people speak, as well as a unique insight into the workings of Parliament and Parliamentary committees. Thank you so much to everyone at Send My Friend who made our visit possible, and particularly to the panellists who took time out of their busy schedules to update and inspire people like me about the ongoing fight for universal education.