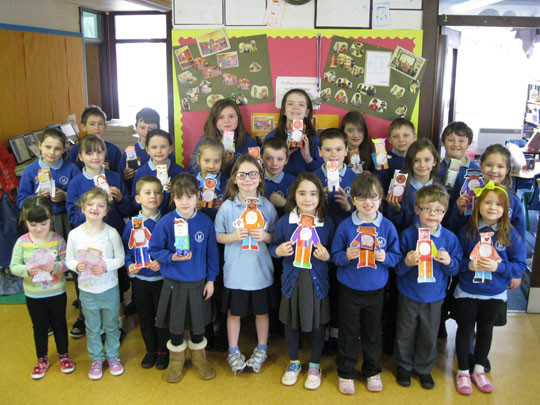 Kyleakin Primary School was one of the first schools in Scotland to take part in the Send My Friend to School Campaign 2015.

As part of the campaign, pupils at Kyleakin Primary School made 3D models of world leaders, along with a message of what they would do in their position: build safe routes to school; buy more resources; train more teachers. They then posted these off to the local MP, the late Charles Kennedy.

Pupils took part in a discussion about the importance of showing support for 58 million children all over the world who aren’t getting an education. They learned that one in three of these children are disabled, and more than half of them are girls. At the current rate, it will be 2086 before everyone is in school.

Photos were taken and displayed in the school hall for parents and visitors. The West Highland Free Press also published a photo.

Joe Russell, from Primary 6, said: “I think it is a real shame that over 58 million children aren’t getting to school. If I was one of them I would feel quite angry that I wasn’t getting an education and that a lot of people are feeling the same as me.”

Get your 2020 Teacher Pack with everything you need to bring the campaign to life in your classroom.

Send My Friend to School brings together thousands of children across the UK to speak up for the right to education.
This website uses cookies to improve your experience. We'll assume you're ok with this.Accept Read More
Privacy & Cookies Policy
Necessary Always Enabled