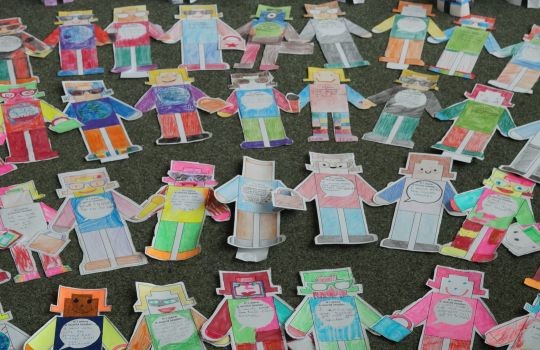 Emma, Georgia, May, Annabel and Murren talked about the campaign and led the children in singing and praying. We showed them how to create the World Leaders.

At the year 9 presentation afternoon, student May gave a passionate speech about the campaign to year 9 students and their parents.

Harriet, Morgan, Katherine and Amy in year 10 were invited to Oxfam, the Department for Education and Parliament.

They spent 40 minutes with Nick Gibb, Minister of State for Education in his office at the Department for Education, talking about the importance of the campaign and what they hoped MPs would do to support. They met local MP, Nick Herbert at Parliament, and shared their hopes for the campaign with him.

Year 9 student Georgia wrote a press article about the campaign and our visit to Parliament which was published in the local newspaper, The Bognor Observer.

Four Year 10 students were invited to the first “Celebrating Young People” Award Ceremony on account of their work with the campaign. This gave them a chance to highlight the work of the campaign with Baroness Hollis and Cardinal Vincent Nichols, who were presenting awards and certificates.

Members of the Junior Leadership Team described the Send My Friend Campaign to visiting partner teachers and headteachers from Rwanda, Uganda and Ethiopia.

They spoke about the campaign to their British Council UK partner schools, The Weald and Muntham House, who are involved in international work and are very interested in joining the campaign next year.