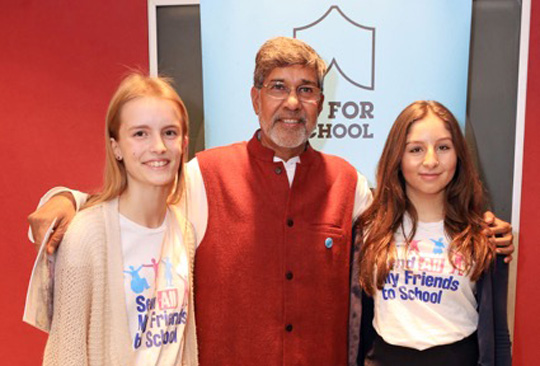 The GCE UK Young Ambassadors met with the 2014 Nobel Prize Winner at the launch of a new education campaign.

Rebecca Unwin and Maisie Le Masurier spoke with Kailash Satyarthi, who has spent decades campaigning for the right to education, and asked what young people can do in 2015 to help achieve education for all.

Kailash said: ‘Young people are already making a massive difference. You are leaders and partners in the campaign for education. The way you are mobilising youth and bringing the issues to politicians and the public is already working.

‘One thing that can be done more is using social media to create a ripple effect, and to not be confined to one country, as it should be a truly global campaign. The key is to make it bigger and bigger and louder and louder!’

Kailash won the Nobel Prize alongside Malala Yousafzai, in recognition of his work fighting against child labour and for child rights. Kailash co-founded the Global Campaign for Education in 1999, of which the Send My Friend Campaign is part.

Rebecca and Maisie met Kailash at an event titled ‘Our Future, Our Rights – Youth Rising’ hosted by A World at School and ODI, which launched the #UpforSchool petition. The event, on London’s Southbank, was presented by former Prime Minister Gordon Brown,  alongside Malala Yousafzai’s school friends Kainat Riaz and Shazia Ramzan and Ade Adepitan, the British TV presenter and Paralympian.