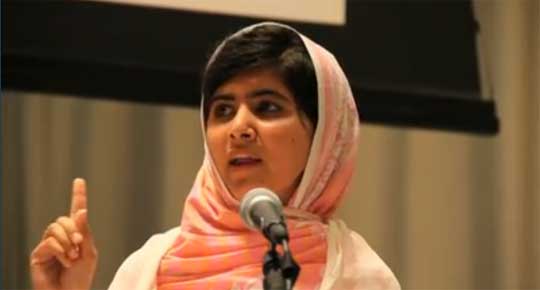 Malala Yousafzai, the teenage education campaigner shot in 2012 by a Taliban gunman, has won the 2014 Nobel peace prize.

Malala won along with Kailash Satyarthi, an Indian children’s rights activist who helped set up the Global Campaign for Education, which the Send My Friend Campaign is part of.

At 17, Malala is the youngest every winner of the prestigious prize, which has been awarded to Nelson Mandela, Martin Luther King and Mother Teresa.

In 2012 Malala was shot in the head by a Taliban gunman,  in response to her campaign against the destruction of girls schools in Pakistan. Since then she has continued to campaign for girls’ education, and has spoken before the UN, met with Barack Obama and published her own book.

In 2012 the Send My Friend to School campaign helped deliver a petition of 250,000 signatures calling for Malala to be nominated for the 2013 Nobel prize, and has continued to support her campaigns.

David Archer, from Actionaid, said : “Kailash always argued that the best place for children to work is in school. It is inspiring to see the Nobel Prize committee recognise that education is so fundamental to achieving peace and justice.”