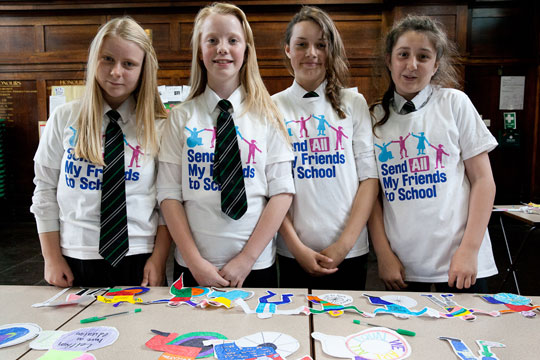 Over the last two weeks, Netherthorpe School have been taking part in Send all our Friends to School. We have been raising money and adding signatures to a huge petition with lots of little paper people!

Children and teachers have taken part, to raise as much money as possible.

In 2000 over 180 countries signed up to a set of commitments for a better world, to tackle issues such as hunger, poverty and disabled children missing out on a vital part of a childhood! In 2000 it was estimated that 114 million children were missing out on an education. The number has luckily halved- but this still leaves 57 million children around the world who don’t go to school. World leaders made a promise that by 2015 all children will be attending school; and this campaign reminds them of their promise!

Netherthorpe held an event in the school hall on the 4th of July; cakes were baked and sold; petitions were signed; guessing games were held, like guess the number of crayons in a box; and a huge ginger-bread man was made which students guessed the name of. All of this was to raise money for children to attain an education. Students coloured paper dolls, which were then signed, as the petition. They were all joined together to make a huge chain. We need to be noticed…

By Hannah Walters with help from Alesha Tomlinson!