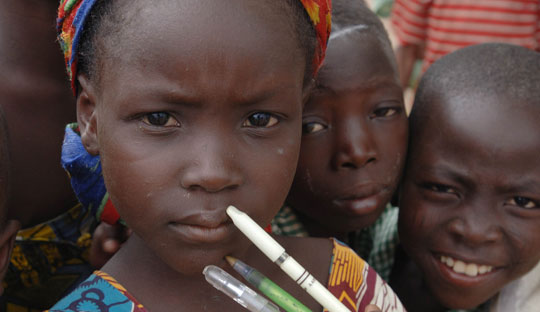 After months of pressure from education campaigners, world leaders from both donor and developing countries have made vital pledges to increase spending on education at the Global Partnership for Education summit in Brussels on 26 June.

Thanks to everyone who took the Send My Friend website e-action and sent a message to DFID Ministers, Lynne Featherstone and Justine Greening! And thanks to all our other supporters of Send All My Friends to School this year.

Influenced by your campaigning the UK government have increased their previous contribution to the Global Partnership for Education. DFID Minister, Lynne Featherstone, attended the conference and announced that the UK will give up to £300 million over the next four years which is very good news.

Overall £1.2 billion was raised from aid donor countries and a further £15.5 billion in pledges came from 27 developing countries who said they will make big increases in their education budgets and funding over the next few years.

The hope is that another £0.8 billion can be raised in pledges from donor countries so that the Global Partnership for Education can help 29 million children in more than 60 developing countries to access schooling.

Julia Gillard, Board Chair of the Global Partnership for Education and former Prime Minister of Australia, said: “We have today secured a record commitment of new funding for education in developing countries around the world. This exceptional result is a vote of confidence in the power of education to lift the lives of millions of children, and is a tribute to far-sighted leadership in our partner countries — donors and developing country partners alike. No other organization has a partnership structure that has leveraged such substantial funds from developing countries. The Global Partnership for Education provides the long term, systemic support that governments need to build stable, effective education systems.”

Malala Yousafzai’s article in the Guardian

A blog from RESULTS UK, a member of GCE UK