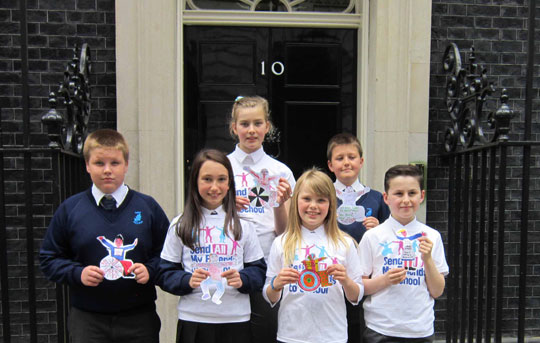 Children from Ysgol Pen y Bryn travelled over 200 miles from Colwyn Bay to Westminster today to deliver messages from young campaigners at their school to David Cameron. They are part of an international campaign asking that he and other world leaders keep the promise made in 2000 to give every child in the world an education by 2015.

Six pupils from the school delivered a box packed full of colourful decorated buddy figures carrying messages about the importance of education to 10 Downing Street. Their messages challenged world leaders to take action to address the fact that more than one third of children missing out on school have a disability.

As part of their trip they went on a tour of the Houses of Parliament and visited the office of their MP, David Jones, who is the Secretary of State for Wales. They asked for his views on their campaign.

David Jones MP said that: “This campaign is very important. The more people are educated the better for all our world. This campaign is going very well and that’s thanks to young people like you getting involved and coming all the way to London to deliver messages to the Prime Minister.”

Grace Knightly, a year 6 student at Ysgol Pen y Bryn said: “This campaign matters to me because I feel honoured to have an education and want to help others who don’t have this opportunity. I learned that the deadline to the promise that world leaders made is 2015 –with only one year left and 57 million children out of school we need to hurry!”

Ysgol Pen Y Bryn has taken part in Send My Friend to School every year for 5 years. Watch this short film from 2013 to find out what motivates the school to keep on taking part in this campaign!