Surrey school girls give teachers a lesson in inclusive education 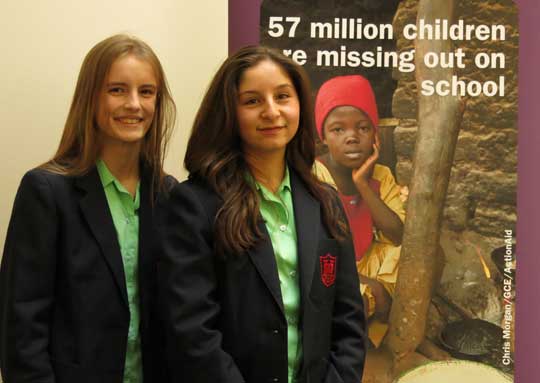 The Young Ambassadors for the Send My Friend to School Campaign, who recently returned from a trip to Uganda to investigate the barriers to education for children with disabilities, will address the National Union of Teachers.

Maisie le Masurier and Rebecca Unwin, from Guildford County School, will attend the conference being held in Brighton this Saturday (19 April).

They will share their first hand experiences from the trip, including a showing of the film that was shot while they were out there. They will also explain the obstacles to inclusive education, the impact a lack of education has on children and their families and they will call on the NUT to help support the campaign.

Maisie says: “We must make our government listen and push other countries to make good their millennium promise.  Their promise made along with 188 other UN countries that there would be universal primary education and every child would go to school.”

Their attendance at the conference is part of their on-going role as Young Ambassadors for the Send All My Friends to School campaign, which aims to raise awareness of the need to provide every child with a primary education by the year 2015.

This was one of the eight Millennium Development Goals (MDGs) that world leaders agreed on back in 2000. While some progress has been made, there are still 57 million children worldwide who are missing out on school, more than one third of whom have a disability.

Later in the year, Maisie and Rebecca will also visit the House of Commons as representatives of the half a million young people who take part in the GCE UK’s Send My Friend to School campaign each year.

They are hoping to get over 5,000 schools signed up and a resource pack can be downloaded from the website with a teacher’s guide, posters and DVD.

Sightsavers, who hosted the trip to Uganda, supports inclusive education programmes by supplying equipment, assistive devices and Braille machines, as well as specialised training for teachers.

To get your school involved and for a free Send ALL My Friends to School pack visit www.sendmyfriend.org