Our year as Young Ambassadors 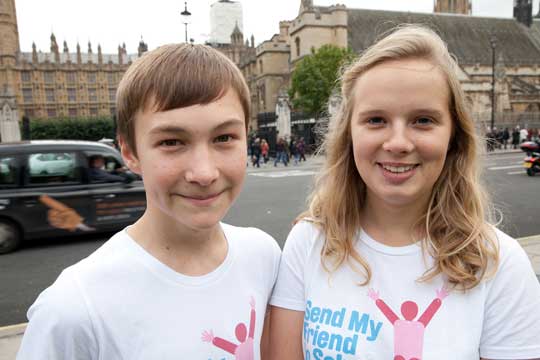 As we move into 2014, Sam and Millie, our committed Young Ambassadors for 2013, reflect on their experiences during an eventful year of campaigning for Send My Friend to School, and give some words of inspiration for us all.

Wow, what a year!!  It’s hard to know where to start.  We have been to Parliament, India, New York and many schools in our local area.  Who would have thought a school campaign involving 1,600 students would lead to this?

It started with Desmond Swayne, our local MP, visiting our school for an interview.  We subsequently travelled to London to present him and Stephen O’Brien MP, former Parliamentary Under Secretary of State for International Development, with our campaign model.  So began what turned out to be the best year of our lives.

We entered the Steve Sinnott Award to become the Young Ambassadors for the Global Campaign for Education 2013.  We remember to this day the moment we were told by our teacher, Mrs Hickman, that we were successful.  It was an emotional time – we just could not believe it! 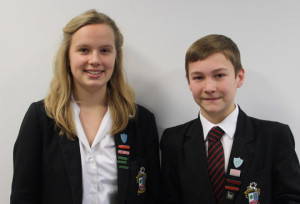 Then preparation started for our visit to India in February half term.  We created comics of our school, and of our home lives, and collected resources to donate to the education projects that we would visit.  We were all set and ready to go.

The visit to India was an eye opening and emotional roller coaster.  This incredible place was a kaleidoscope of colours and a cacophony of sound, and its people who were so welcoming touched us with their kindness and hospitality.  Getting an education is extremely tough for them and we heard many harrowing stories.  We were able to stand with them at a public hearing and give evidence about the issues we had seen – we felt we were making a difference.   We will never forget the people and organisations we met in India.  The things we saw and the stories we heard gave us the energy and enthusiasm to drive the campaign forward. 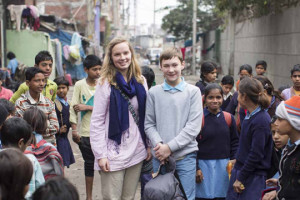 On our return to the UK, we presented our findings at the annual National Union of Teachers conference in Liverpool.  We also shared our experiences and drove the campaign though assemblies and visiting local schools.  Throughout the year we spread our message of the barriers to education and the injustice that so many face.  We have tweeted and blogged to keep the campaign alive, and we were also able to talk to the All Party Parliamentary Group on Global Education for All.  We estimate that our campaigning touched over half a million people, and about 5000 schools signed up for the 2013 Send My Friend to School Campaign.

Later in the year we held an ‘Education for All Day’ at our school which was a great success.   Teacher puppets were made and compared with those made by disadvantaged girls in Delhi.  The differences over the issue of what makes a good teacher were staggering.  We also ran a successful activity to highlight the importance of water, having noted the various ways that water had a big impact in the Delhi slums.  During the afternoon, junior school pupils came in to join us in similar activities.

Being invited to attend Malala Day at the UN in New York was a huge privilege.  We were able to represent the thousands of school children in the UK who participated in the Send My Friend to School campaign.  On arrival in New York we met, spoke and shared ideas with young campaigners from all over the world.  A meeting with Philip Parham (Deputy UK Ambassador to the UN) was inspiring and we learnt his own take on Education for All.  Malala Day was incredible; the passion and motivation ignited by that day is hard to explain.  To hear Malala and Ban Ki-moon – and to speak personally with Gordon Brown – were huge privileges.  Many friends were made in New York with whom we maintain regular contact. 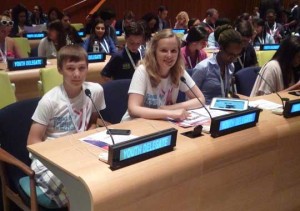 Promoting this vital campaign has been a huge honour, and we have enjoyed every minute of it.  There are so many people to thank for all their encouragement and support, in particular Mrs Hickman from our school, John McLaverty of Oxfam, our local MP Desmond Swayne, Maju Varghese, the Oxfam team in India, the Steve Sinnott Foundation and Karen Garvin of ActionAid.  There are many others who have supported us as well – so thank you to you all.

We have learnt a great deal about people, poverty and advocacy, and we know that our experiences have altered our perceptions and the direction of the rest of our lives.  We believe we have done our utmost to promote further the Send My Friend to School campaign, and know that now we must all work together to make the world a better place through promoting education for all.

The time has come to pass on our role to Maisie Le Masurier and Rebecca Unwin – the new Young Ambassadors for 2014.  We would both like to congratulate you and wish you a successful year.  We can truly say you are in for the time of your life.

We will continue to campaign until all our friends have been sent to school!