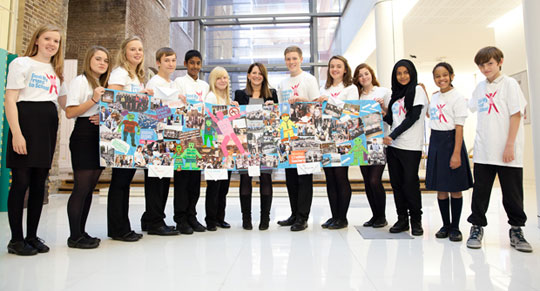 A dozen young campaigners from across the UK met DFID Minister Lynne Featherstone yesterday and had the chance to ask what the government is doing to make sure that every child worldwide gets a chance to go to school.

They created a banner and presented this to Lynne Featherstone showing what young people in the UK have been doing as part of the Send My Friend to School campaign. They also challenged her on what steps the UK government is taking to ensure universal primary education up to and beyond 2015.

In 2000, as part of the Millennium Development Goals, world leaders promised that every child would receive a quality education by 2015. Since the Global Campaign for Education began, the numbers of children out of school has halved, but there are still 57 million children missing out on school with only one year left to the target year for universal primary education.

There are some important groups of children who are particularly struggling to get into school and to complete a quality education. These include children with disabilities, ethnic and religious minorities, girls and people living in vulnerable locations.

The young delegates were particularly interested to hear from the Minister about the set of goals that will replace the Millennium Development Goals, as David Cameron is Co-Chair of the UN Post 2015 High Level Panel working on these.

Katy Barrett from Ringwood School said ‘It is important to meet Lynne Featherstone at DFID as she has the authority to make a difference. After all the campaigning we’ve done at Ringwood you still need someone to talk with who can make the decisions’.

Aaron Chowdhary from Kingsbury School said ‘It’s good to know that the government here is taking this challenge on and that we, as children, have the opportunity to speak out on behalf of children from other countries who don’t yet have the right to go to school.’

Lynne Featherstone said ‘It was fantastic to meet such passionate children who care so much about the world they are growing up in and helping to shape. I was impressed by their understanding of the importance of education and their commitment to help less fortunate children across the world receive the education they deserve.

Education acts as a ladder out of poverty and helps young people reach their full potential. Making sure children in developing countries get a good education is a priority for DFID and we are working with other countries to make sure that education is an important part of the new set of development goals to be agreed in 2015.’