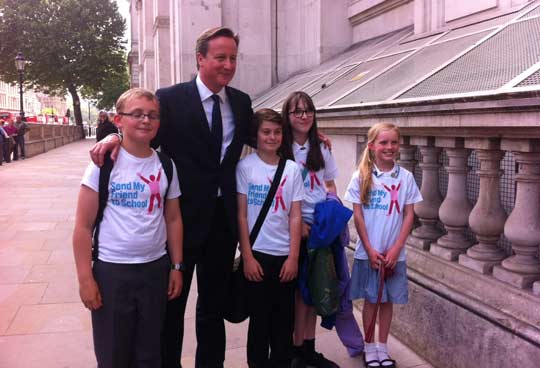 When pupils from Ysgol Pen Y Bryn and Ysgol St Elfod travelled 250 miles from Wales to Westminster they had a surprise meeting with the Prime Minister!

Pupils at these schools made more than 300 colourful cut-out teacher figures which they brought to deliver in person to 10 Downing Street. Following a tour of the Houses of Parliament and some filming for Send My Friend to School, our young campaigners paid a visit to their MP, David Jones, who is the Secretary of State for Wales.

The next step was to deliver their teacher messages to 10 Downing Street and it was after this had happened that they met the Prime Minister as he was walking down the street. He was stopped in his tracks by a voice asking ‘Mr Cameron, will you Send My Friend to School?’. This gave our young campaigners a great opportunity to tell him a little about what they had been doing for Send My Friend to School and to pose for a quick photo with him!

“What we did today was important because we told the politicians that a lot of people including children want everybody in school by 2015.

We think every child should have a teacher because you can’t really learn by yourself so you need a teacher who knows everything that you need to learn.

We actually took the teacher figures that we made to 10 Downing Street and got to talk briefly to the Prime Minister, David Cameron. Bringing our work was a good idea because David Cameron understood what we were here about and we showed him that we were ready to do whatever it takes to get every child in school by 2015.

We think the campaign will really help a lot of people get children into school and increase awareness. I thinks the trip will raise education on the politicians list of priorities.”

“I think it was extremely important for our pupils to take part in this campaign as it gives them the opportunity to act locally and think globally. By coming to London to deliver their messages and teacher cut outs they have understood that their voices and values are listened to and have been heard by a World Leader. As global citizens of today and tomorrow I consider being part of such a valuable campaign and a memorable experiences which have will stay with them for the rest of their lives and hopefully encourage them to continue to be concerned about such global issues.”

Here’s a report from Molly Owen and Finley Coombes (both aged 11 years) from Ysgol St Elfod:

Every child needs a teacher so they can learn new skills, find out their talents and it will help them get a good job.

If we did not have a teacher we would miss learning new things and doing all the fun lessons. We hope it will help all the children and maybe people will start to realise how bad it is and help.”