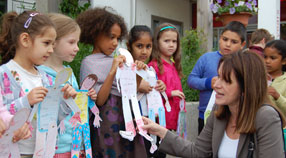 On Friday 14th June, Rhodes Avenue Primary School in Bounds Green invited Lynne Featherstone, MP for Hornsey and Wood Green and DfID Minister, back to school to hear from pupils about the need for 1.7 million professional teachers to get every child worldwide into primary school.

This morning at the school, the pupils presented more than 700 cut-out teachers they had made and gave them to Lynne to give to the Prime Minister to remind the UK government of their promise to make sure all children have access to primary education by 2015.

Alisa Robb 11, said “I’ve realised that we’re lucky to all have the chance to get an education in our country, and that without it, people can get stuck in a circle of poverty”. David Saipe, also 11 said: “I’ve learnt how important it is to make sure girls get an education. When a mother has been educated, her children are much more likely to live beyond the age of five.”

The children spent over an hour with the MP and first gave a presentation, before asking one of their teachers to lie on a piece of paper so that they could draw around them for one of the cut-outs and then had a Q&A as part of their school assembly.

Lynne Featherstone said, “It is great to see the hard work the young people at Rhodes Avenue have put into to the Send My Friend to School campaign. Every child has the right to a good education and the UK Government is working to achieve it in many of the world’s poorest countries. By 2015 UK Government support will have helped train 190,000 teachers and to get 11 million children into school.”