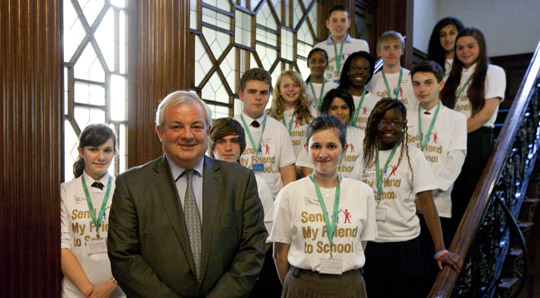 The young people travelled to London from North Wales, Essex, Glasgow, Leicester, North Yorkshire, Oxford, and Wolverhampton, to join with others deeply concerned about the 67 million children worldwide who are missing out on school.

They had a private meeting with Stephen O’Brien to ask him about what the UK government is doing to help get Education for All. The ‘question time’ type event took place at the Department of International Development on Tuesday 10 July.

The delegation was led by Emma Woods, 17, from North Yorkshire (above, front right) Emma has been involved in the Send My Friend to School campaign since she was 14. She has engaged her MP William Hague on the issue, who then helped her to get this appointment.

Emma says she is passionate about the issue, “because education has done so much for me when I have been through bad times, so I want other young people to have the opportunities and support I have had. Also I love my education!”

The questions the young campaigners asked ranged from asking; why the attempt to get every child into school has plateaued and whether politicians have given up on meeting the Millennium Development Goals?, to efforts on quality versus quantity education, what DfID is doing to help the specific challenges for getting all girls into school and disabled children, and finally demanding to know what difference young people’s campaigning really makes to UK government policy?

What the young people thought 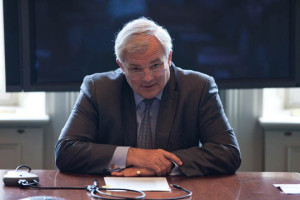 Reece Beale from Southend: ” I thought the meeting with the Minister went better than expected; we did get an answer to all our questions and it wasn’t all waffle! There has been a massive step in the right direction with the numbers of children out of school dropping from 100 million in 2000 to 67million in 2012. The figure has stalled for the last 2 years but hopefully this will begin to pick up again.

I definitely want to go on and raise more awareness of the fact that 9 out of 10 disabled children do not go to school in many developing countries, that girls miss out most and parts of the world are really struggling to provide even a basic primary education for all their children. ”

Bobo Kalungu-Banda from Oxford: “I’m from Africa – my Dad, through a scholarship, got a chance to come here for his education. We want everyone to have the opportunity of a good education – we can’t have a world full of uneducated people.”

Alex Cotter, also from Oxford: “Education is the key to solving poverty. I have always wanted to make a difference to the lives of others and this project has allowed me to make my views heard. I think it’s unacceptable that the numbers of children getting into school has stalled. It is our duty as educated young people to try and change that fact.”

Shalin Abraham, from the West Midlands, said: “DfID are working incredibly hard, but we must continue to look at education as an investment not a cost.”

Jasmin Sahota from Leicester: ”It’s fantastic that so many more children are now in education, so that the quality of their future lives is increased, but we shouldn’t stop until there are no children missing out on school.”

Tanisha Patel, also from Leicester: “The meeting with the Minister went brilliantly. As girls it is particularly shocking to learn about the conditions of education overseas. It makes me appreciate the education we have. The numbers of children missing out on school shouldn’t be stalling, so this means we need to increase our efforts and campaigning.”