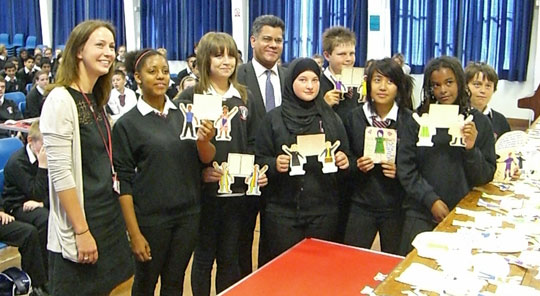 A report from Carl Aramo and Mark Foster, Year 8.

On May 20th Year 8 students at Prospect School dedicated a day to the Send My Sister to School campaign.

The main focus of that day was poverty; we were looking at the effects of poverty and the people who are affected by poverty. We learned that 67 million children do not have education, and over half of those are girls, hence the name Send My Sister to School.

After this, we observed a DVD which outlined the problem (children without education), and explained what the campaign aims to achieve – reducing the number of children not receiving education. We then created buddies, which are cardboard cut-out characters based on us, and they had dialogue bubbles so we could input a message to send on to our local Member of Parliament.

Alok Sharma MP came to our assembly on July 1st to pick up our buddies and speak to us about the value of the campaign. He gave them to our Prime Minister, David Cameron, who has the power to hand them to world leaders, which ultimately can lead to fewer children not in school.

Overall, the day was quite interesting and it is a good feeling when you know you could ultimately be helping a small child somewhere by giving them an education and a good future.