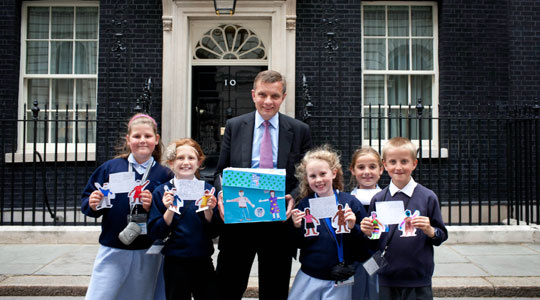 Pupils from Ysgol Pen y Bryn in Colwyn Bay, Wales, became time travellers in their quest to support Send My Sister to School.

They began their journey with an assembly trip in Doctor Who’s tardis, to find out about the promises made by world leaders back in 2000, as well as the reasons why girls are missing out on school today. They were then invited to London by their MP, David Jones to hand their messages in to the Prime Minister at 10 Downing Street.

Their teacher Tabitha Sawyer had this to say about their visit: “The whole school has come on board with this very important campaign. The children were very excited by it and wanted to investigate. It’s been the best feeling to see their faces here at Downing Street, especially knowing how important the issues are behind this visit.”

“I got involved with the campaign because I’m very passionate about global citizenship. I believe it’s important that children act locally and think globally.”

And David Jones MP added: “The pupils have done a wonderful thing. They understand how important it is that everyone gets an education. I went to see their assembly, saw how strongly they felt and suggested they come directly to the Prime Minister with their messages. I think it’s very important and a wonderful thing. I’m so pleased that the children care about it. All in all they are very persuasive and enthusiastic people.”

Lucy (aged 9) was one of the pupils who came to London to deliver their messages by hand. She said: “I feel very excited. Because the PM wasn’t there himself I hope he reads and understands our messages and why we delivered them. It makes me want to do more.”