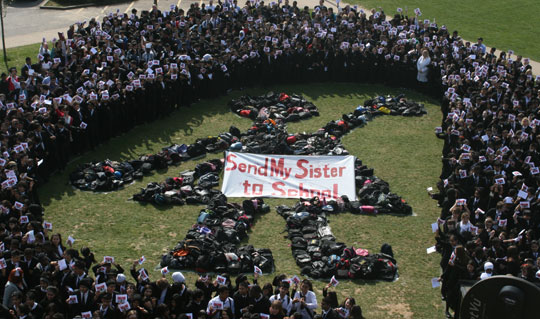 This year 1500 Lampton students took part in Send My Sister to School!

The students wrote postcards to their MP, Alan Keen, to ask him to keep the promise that world leaders made in 2000 that all children would have the opportunity to go to school by 2015. At present most of the children who do not have the opportunity to go to school are girls. So as a school we made the shape of a girl, and stood alongside a banner saying ‘Send My Sister to School’.

A group of students, ranging from year seven to year nine, took the photograph. Alan Keen met with staff and students at Portcullis house in Westminster and students were able to give him their messages, talk to him about the ‘Send My Sister to School’ campaign and to ask him questions.

Alan Keen has sent a letter to students at Lampton School saying that he has now passed the postcards on to the Prime Minister. The following week the students who went to Westminster led a whole school assembly to feed back to other students in the school.