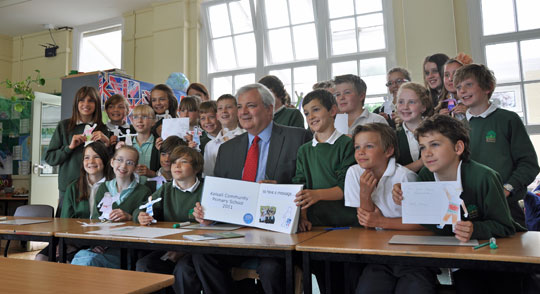 Year 6 Pupils at Kelsall invited the Junior Minister for International Development, Mr Stephen O’Brien, to their school to talk about how important it is for children to have access to education.

They presented Mr O’Brien with a petition book- during the week they had collected signatures from their parents and everyone in their community to support the campaign. They asked Mr O’Brien what the government is doing to make sure that children around the world, especially girls, have the chance to go to school.

Stephen O’Brien, said: “I was delighted to meet the children of Kelsall Primary School to find out how they are supporting the global efforts to get more girls in the developing world into education. We have put women and girls at the centre of the UK Government’s work in the world’s poorest countries because we know that they hold the key to tackling global poverty.”

Year six pupil, Josef Gunn, said “When we were talking with Mr O’Brien today, I was shocked to learn that 67 million children are out of education”.

Ceri Lamberton, a year six teacher at Kelsall school said: “The visit today has been really valuable for the children. They feel they have a voice and that they are able to make a difference, especially now that they are leaving year six to go to high school.”