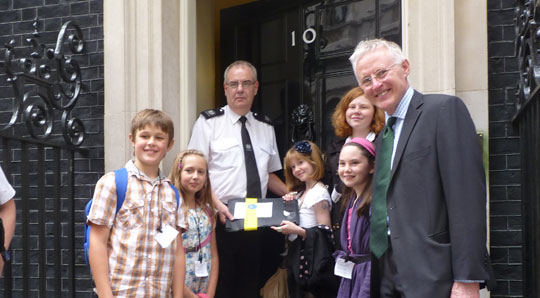 Pupils from Aldborough Primary School in North Norfolk delivered their messages to Number 10 Downing Street with their MP, Norman Lamb.

“We made an enormous banner as a reminder to David Cameron that World Leaders had promised to rectify this situation by 2015,” said their teacher, Mrs Carrie Lawson.

Mrs Lawson said: “As well as making the banner, the children wrote some really persuasive letters to their MP, Norman Lamb, asking him to personally deliver the banner, for them, to the Prime Minister. He was so impressed that he wrote back to says he’d be delighted to do as they asked – and would the children like to come down to help deliver it, so as to make maximum impact?”

As well as dropping in at Number 10, Norman Lamb took the children on a tour of the Houses of Parliament. ‘It was the experience of a lifetime and I’ll never forget it’ said 10yr old Mollie.

Jack and Bette, aged 10, were equally excited, ‘being allowed to go right up to the door of David Cameron’s house was amazing’.