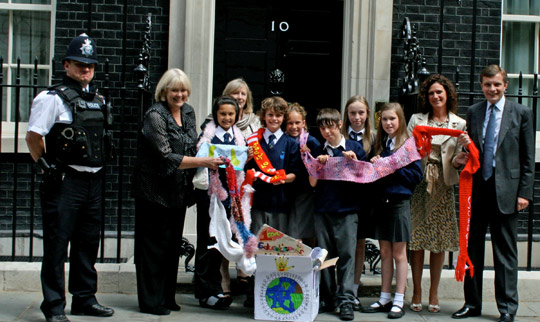 We knocked on the door of Number 10 and presented our very special scarf, which was to support ‘Send My Friend to School’ campaign, which started in the year 2000 when the World leaders promised to make sure every child in the world receives a primary education by 2015.

To remind them about their promise our school, Ysgol Pen y Bryn, Colwyn Bay, created a scarf, signed by thousands of supporters in our local community, which was over 20 metres long. We also did an assembly in front of the school and our MP David Jones. This is how we came to deliver our scarf to David Cameron’s front door, because David Jones was so impressed with our work and commitment he invited us to London to deliver it personally.

We were also got taken to the House of Commons and the Wales Office. We are all very proud of our efforts for the campaign and the fact that we delivered it to a World leader’s front door. We are so very grateful to David Jones MP for inviting us and making sure the 1Goal message ‘KEEP YOUR PROMISES! SEND MY FRIEND TO SCHOOL’ was heard.