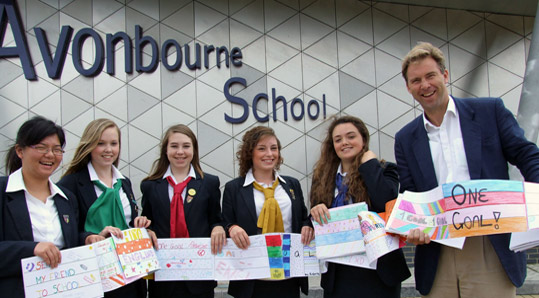 Our pupils had one goal when they created a 50 metre petition in the shape of a football supporter’s scarf twice the length of the Littledown Centre’s swimming pool.

The petition is for the World Cup inspired 1Goal campaign, reminding world leaders about their promises to ensure all primary school children across the globe have a school place by 2015.

Bournemouth East MP Tobias Elwood now plans to take the petition and a group of Avonbourne pupils to 10 Downing Street to officially hand it to the Prime Minister David Cameron.

Mr Elwood said: “I’m delighted to receive this petition and I know Mr Cameron is committed to ensuring that Britain and other signatories share the same goal of improving education for children.

“I am inviting pupils from Avonbourne to come with me to Downing Street when I deliver this petition, because it will make a far more powerful statement.”