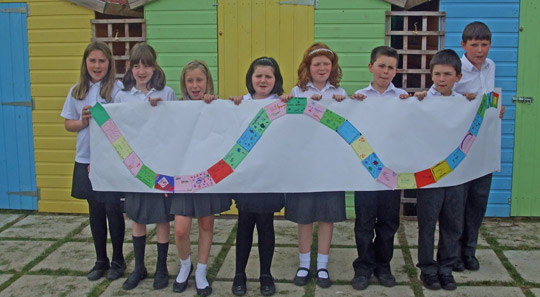 St John’s pupils learned how to tell stories to explain the 1GOAL message.

St John’s school in Bridgnorth invited children from two other Bridgnorth schools this week to a storytelling performance.

The aim of the event was to show the 9 and 10 year olds that they have a voice and can raise awareness about the fact that 72 million children in the world don’t get a chance to go to school at all.

The year 5 pupils asked the question – What would you do if you didn’t go to school? Then they explained the reality for millions of children who have to work in factories or scavenge on rubbish dumps instead of getting an education..

During the morning the St John’s pupils worked with Peter Chand, a professional storyteller, to develop story telling techniques. They learned a traditional Indian tale and then performed it to their visitors in the afternoon.

The event came about as a result of a project called Picturing our World coordinated by Bridges, a charity that works with schools and communities across Shropshire.

The call to action for the afternoon was for everyone to sign up to the 1Goal campaign that wants to see every child in the world get the chance to go to school. Each school was presented with a 1Goal pack and Alison Thomas from Bridges will be doing follow up workshops with them to explore the issues further and to help them all sign up to the 1Goal Campaign.

Helen Murray, Head Teacher at St Johns said “The event was a great opportunity for spreading the message about the need for universal education at the same time as bringing 3 schools together to enjoy Peter Chand’s stories and building our local and global community cohesion.”