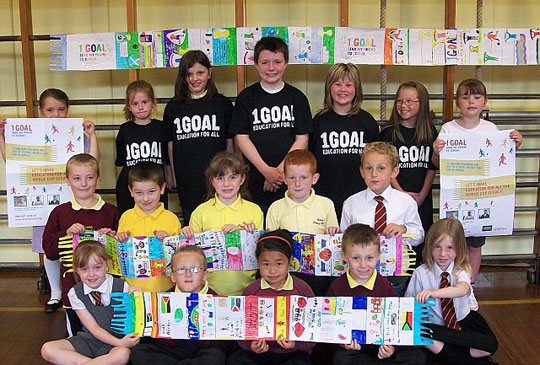 Learners at Victoria Primary made colourful paper scarves and met their MP Pamela Nash. She asked the Prime Minister a question in Parliament about Send My Friend to School. Her question and David Cameron’s answer are shown below.

Pamela Nash MP: I am sure that the Prime Minister is aware of the Send My Friend to School campaign, in which my young constituents at Victoria primary school in Airdrie are involved and about which they will be writing to him this week.

The campaign aims to ensure that the Government direct the £8.5 billion that was committed by the previous Labour Government towards universal primary education by 2015. The matter will be discussed on 7 July at the education summit in South Africa, which is tied in with the World Cup. Has the Prime Minister personally spoken to President Zuma and other African leaders about their pledges, and will he confirm that a review of the Department for International Development’s funding will not compromise our pledge?

David Cameron: First, I welcome the hon. Lady following her election; I think that I am right in saying that she is the youngest Member of the House of Commons. She is quite right to talk about the millennium development goals and aid spending. It is good that it is common cause across the House of Commons that, despite the difficult decisions that we will have to take, we should meet the target of 0.7% of gross national income. We are committed to doing that, which means that we can continue to support the poorest people in the poorest countries. We will be addressing such issues this weekend at the G8 in Canada.