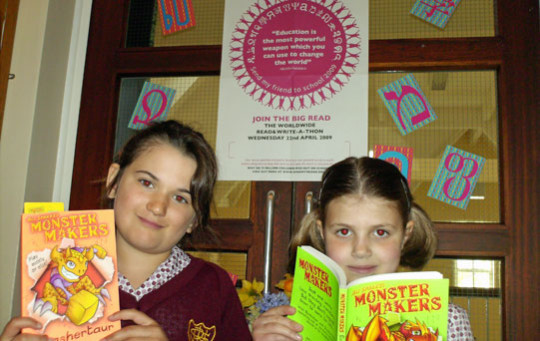 22nd April was a great day. I didn’t think it was possible to have so many people visit school in one day. We arrived at school and everything seemed normal but at assembly we got to know that 75 million children don’t get to go to school. It even happens in this country but mostly in poorer countries. It especially happens to girls like us that they can’t go to school. I thought that wasn’t very fair.

I read about a big problem in Afghanistan where some people called the Taleban say that women aren’t very important and they are not allowed to go to school. Gordon Brown should be able to pay out some more money so that all the children around the world can have some education and learn to read.

To help us think about that we had lots of famous visitors come to school. Portsmouth Football Club came and I shook the hand of their mascot called Nelson. Ali Sparkes came in and read part of her new book. This was my favourite part of the day as I also got two books signed by her. We then listened to Sean Beech who has written a book called the Ice Crown. He played creative thinking games with us.

Finally we coloured pictures of the door to the prime minister’s house and wrote to him asking him to help. It was a fantastic day!

By Kate Perry-Evans and Alexandra Geraghty, age 8 (pictured with their reading books)

Find out how schools spoke up for education in 2009.