Sefiyat – girl out of school 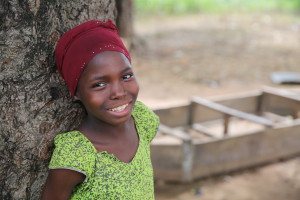 Sefiyat is 10 years old and lives in the Kafuwa community near to Abuja airport. She is not in school and works at home with her family. She is seen washing clothes by the river which has a dead animal rotting nearby contaminating the water. She carries the clothes up the hill to her home. She also works tilling the land on their small farm and does other domestic chores around the compound. Her father won’t send the younger children to school because the community have lost 5 children (2 of his own) to the river. He says he has lobbied the local government for a bridge but it hasn’t been built, so he is reluctant to let his children go to school on the other side until their is a proper bridge. Sefiyat is envious of her older brother who is in school. She wishes she could go and learn to read and write. She is a very bright girl and says she feels lonely when she sees the other children going to school. She is concerned for her future without an education. She would like to be educated so that she can fight for the rights of her community and be a leader. If she got the opportunity to go to school then she would like to become a doctor.

This photograph documents the EU funded project ÃÂ¢ÃÂÃÂSend My Friend to School: learning about the right to education and how to contribute to change within a democracyÃÂ¢ÃÂÃÂ. Please check with the ActionAid UK Education team before using.