Our time as Send My Friend Campaign Champions! 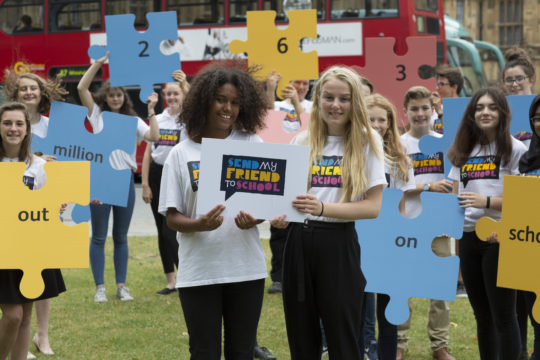 The following is a blog from 14 year-old Maegan Watts who shares her experience of being a Campaign Champion for Send My Friend with her friend Holly – from the start of their campaigning in April to their recent experience hosting two young campaigners from The Gambia.

Myself (Maegan Watts) and my friend Holly Griffiths, were selected to represent the Send My Friend to School campaign as their Campaign Champions. We have been campaigning since April – and it’s kept us busy! Giving assemblies, leading events in the community, speaking on local radio and coming to London in July with our fellow Champions for a jam-packed day of meetings with Ministers and MPs. We even wrote and performed a song for the campaign!

But why? The Send My Friend to School Campaign brings together 300,000 young people, as well as teachers, charities and teachers’ unions across the UK to speak up for the right to education. This is important to me because it saddens me to know that where you’re born, your gender and your wealth can still determine the quality of your education – or if you receive one at all.

This year the campaign has been calling on the UK government to find the missing piece to the global education puzzle – the money to fund education for all. That’s why we’re asking the UK to make a big investment in the Global Partnership for Education, the world’s only fund dedicated to financing education in the world’s poorest countries.

Holly and I recently had an experience which made us even more determined to conquer this injustice. We hosted two young campaigners from The Gambia at our school, Fatoumatta Jabbi and Therese Mendy, who came to Swindon as part of their campaigning in the UK. They came with their teacher, Leeza Jammeh, and the General Secretary of the Gambian Teachers’ Union, Marie-Antoinette Corr. They were also joined by a member of the Steve Sinnott Foundation, as the Young Ambassadors project were created in the legacy of Steve, a great global education campaigner.

The day involved many activities – speeches, interviews, comparing everyday life in Swindon and Banjul, and discussing the value of education. It’s astonishing that something we often take for granted here can be considered as a privilege on the other side of the globe.

We spoke about our schools, teachers and lessons, and Fatoumatta and Therese seemed most taken aback by the amount of students and the size of our school – a big contrast to their school which is an all-girls school with a few hundred students!

We finished this enlightening day with a meal, letting us talk more comfortably and get to know one another better. By the time it came to the end of the day it was hard to say goodbye.

In the space of a few hours we learnt so much about education around the world. We’ve heard the facts before, but being told first-hand accounts made it all feel the more real to us.

Holly and I have definitely made long lasting friendships – and we did this while managing to promote an amazing campaign with an important message. Through our campaigning, we hope that we’ve moved one step closer to achieving education for all. It has been a humbling and wonderful experience!