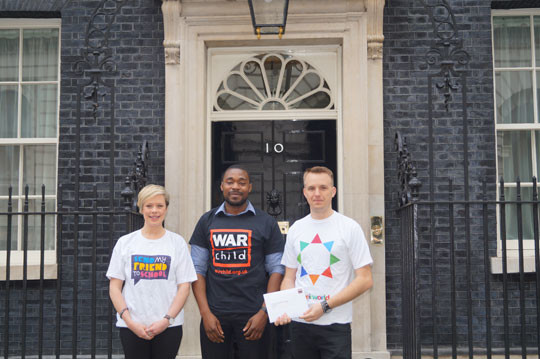 We’re calling on the UK government to step up its efforts to help children affected by war, natural disaster and emergencies and get them the education that is their right.

More than 50% of those affected by war are children. Yet less than 3% of UN humanitarian funding goes on protecting them and a mere 1.4% on educating them. The system is failing children.

In advance of next week’s World Humanitarian Summit, where a new global fund for education in emergencies is set to be launched, more than 250,000 people have signed petitions organised by War Child and Global Citizen, and these were handed in to the Prime Minister yesterday.

The Global Campaign for Education is calling on the UK government to be a founder member of the new global fund and to contribute $50 million in its first year. Read more about our calls for action in the policy report: The fierce urgency of now

We’re also very excited that 3,000 schools are taking part in Send My Friend to School this year. Your campaigning helps to persuade the UK government and world leaders to take action to give an education to some of the world’s most vulnerable children.

Millions of children have had to live through a crisis and have often had to flee from their homes and schools.  That’s why it’s so vital that they receive the education that is their right, to ensure that they are safe, secure, can re-establish a sense of routine after a time of chaos and be hopeful about their futures.

There’s still time for schools to sign up to get a free pack and take part!