Send My Friend in 2016: education in emergencies 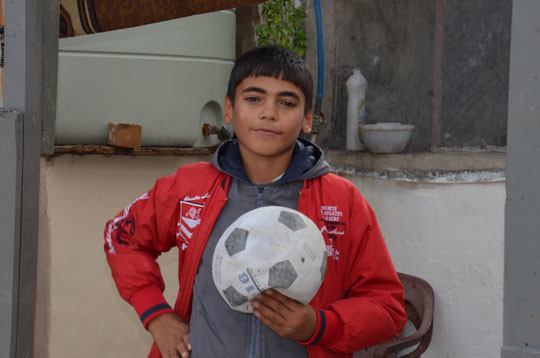 Speak out for the 37 million children missing out on school in crisis affected countries.

Worldwide the numbers affected by emergencies is at an all time high displacing more children than ever before from their homes and schools. For 2016, the Send My Friend to School campaign is calling on pupils in the UK to speak out for the tens of millions of children who are missing out on school due to conflicts, natural disaster and other emergencies.

When conflicts are long-term or massive natural disasters hit, children may go for years without attending school causing whole generations to be lost to education. Half of Syrian children are now missing out on school.

12 year-old Mohamed (pictured above) has been out of education since 2011 when his family had to flee, after an explosive hit their home in Syria. “I was very scared by the noise and the explosives and often could not sleep at night. We are now living in a refugee camp in Lebanon, along with hundreds of other Syrian families.

“I miss school. If I could go back to education I would study to be a doctor, so I could return home to Syria and help people who have been hurt in the war.”

Every year, natural disasters are affecting 175 million children and disrupting schooling for many. Last year in Nepal one million children were left out of school after two massive earthquakes destroyed 35,000 schools and 600,000 homes.

Education is vital for all children but it is more important than ever in an emergency. In the middle of destruction, violence and instability, school can be a place of stability, safety, learning, and hope for the future.

World leaders have made a new commitment to deliver quality education for every child up until the age of 15, but currently more funding is needed to support children in crisis situations.

The Send My Friend to School campaign has launched a new FREE teaching pack. The pack aims to inspire schools to speak out for the right to education for children who are missing out on education due to conflict or disaster. 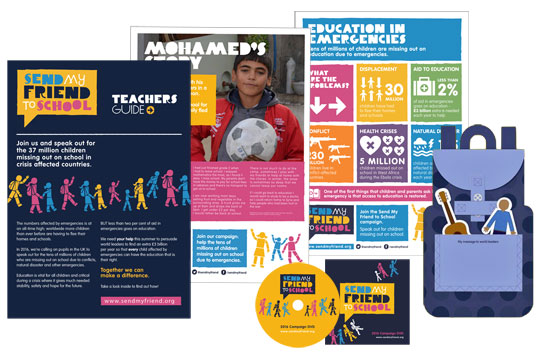 The pack is suitable for 5-15 year olds and includes a DVD, posters, stickers, a Teachers Guide. Order your copy now!

This summer term thousands of pupils in the UK will be creating powerful messages in the form of colourful paper school bags to deliver to their MPs. The bags will detail what they would miss the most if they had to leave their school behind, and will symbolise the journeys undertaken by children fleeing war or disaster.

They’ll be using persuasive words to ask world leaders to take action and ensure that education is made a top priority for children affected by emergencies.

Date for your diary! Our day of action will take place on Friday 1 July 2016 – it’s a great opportunity to invite your MP into school to hear about your campaigning work as a school. Please note, we have changed our day of action from 24 June to avoid a potential clash with the EU referendum results announcement.