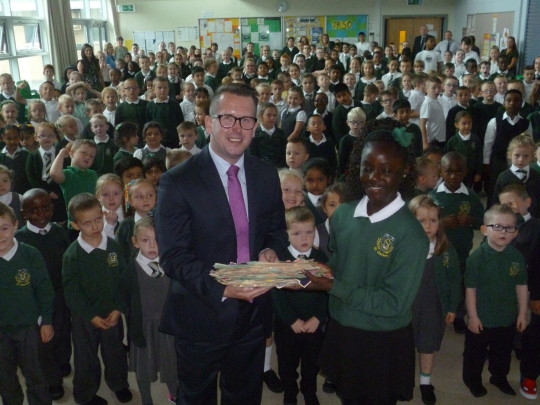 This weeks ‘School of the Week’ is awarded to St Vincent’s Primary School. As part of the campaign, students produced 2D ‘World Leaders’ each carrying a slogan “If I were a World Leader I would…”

Primary 7 students also produced 3D models and set up a display as a focal point in the School Reception Area.

Students then invited their local Member of Parliament, Mr Stewart McDonald, MP for Glasgow South, into school for an assembly during which they highlighted the benefits of Education.

Mr McDonald commented that he “was so pleased to visit St Vincent’s and see the great work that’s being done in the school. The fact that so many children in the world do not have access to basic education is one of the great scandals of our time yet it is one which is often overlooked.”

Mr McDonald accepted a petition from the students which he promised to deliver to the Prime Minister.

He also said he would ask David Cameron to use his influence at the United Nations summit in New York which took place in September to encourage the World Leaders gathered there to ‘Send My Friend To School!’

In addition, two students, Danielle and Keira, were so motivated to support the campaign that they held a Bake Sale, raising the sum of £12.10.