Raising a flag for the Sustainable Development Goals 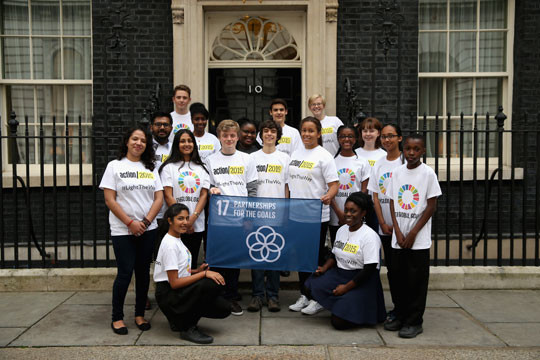 Ahead of the UNGA in New York Send My Friend young campaigners took part in historic moment as a flag to symbolize one of the new Sustainable Development Goals was raised at Number 10.

Yesterday 17 young people, including our Young Ambassadors George and Emily and Send My Friend campaigners from Kingsbury High School, delivered and helped to raise a flag representing ‘Partnerships for the Goals’, one of the 17 new UN Global Goals for Sustainable Development.

This is the first time that a non-government campaign flag has ever been raised at the British Prime Minister’s residence. Read Emily’s blog about the event.

Today at the United Nations Headquarters in New York, 193 world leaders will commit to a series of ambitious targets to achieve 3 extraordinary things in the next 15 years: end poverty, fight inequality & injustice, fix climate change.

The raising of the 17 flags is part of the campaign to ‘Tell Everyone’ about the Global Goals. Founded by Richard Curtis, the Global Goals campaign aims to reach 7 billion people in 7 days. If the goals are famous, if people care about what has been promised by the politicians, it greatly increases their chance of being implemented.

To support the ambition to ‘Tell Everyone’, 17 flags each representing the 17 goals will be raised at some of the most remote communities impacted by the Goals such as the Himalayas, and to some of the most iconic places on earth, from the bottom of the ocean to the North Pole. The flag to represent Quality Education has gone up in India.

Speaking about Number 10 Downing Street’s support for The Global Goals campaign Richard Curtis said, “If we can get the goals into people’s hearts and minds, we really can be the first generation that ends poverty, the most determined to tackle inequalities and the last to live with the effects of climate change.”

Last night, many of the 17 young people raising the flag joined over a thousand people on Millennium Bridge, central London as part of action/2015, to mark the eve of the signing of the new Global Goals. The Light the Way mobilisation in London is one of 100 events taking place across the world, as over 100,000 people take to the streets calling on governments to commit to the new goals. Since the launch of the campaign in January, more than 30 million actions have been taken in over 100 countries.

Many of the young people involved in the flag raising helped launch action/2015 when they met with party leaders in January and have strong backgrounds in sustainability and development. George Watts and Emily Pemberton, the 2015 Young Ambassadors for the Send My Friend to School campaign travelled to Ghana in March with the campaign and The Guardian newspaper to investigate the country’s progress towards meeting the Millennium Development Goal on universal primary education.

George Watts, 15, Young Ambassador for Send My Friend said, “We’re really excited to have raised the partnerships flag for Goal 17 at Downing Street. This is the final goal and it’s all about how charities, countries and organisations can find the money to work together and co-operate to support sustainable development. This is a vital goal because unless we all work together it will be impossible for us to make the progress needed to ensure equality and justice in our world!”

Meera Patel, student from Kingsbury High School, which every year supports the Send My Friend to School, campaign said: “It was a great experience that I shall never forget, everyone working in a partnership to make a global change, just amazing.”

This morning as world leaders meet in New York, Young Ambassadors George and Emily returned to Downing Street to deliver a framed photograph showing the thousands of people on the Millennium Bridge standing together to light the way to a better future. The message to world leaders is, that this generation is watching, determined to see that these vital goals are met by 2030.

Why not learn about the new global goals using our learning resources?

Schools all around the world are invited to take part in a World’s Largest Lesson from 28th September to 2nd October and to learn about the new global goals so that we can all play a part in helping to achieve them.