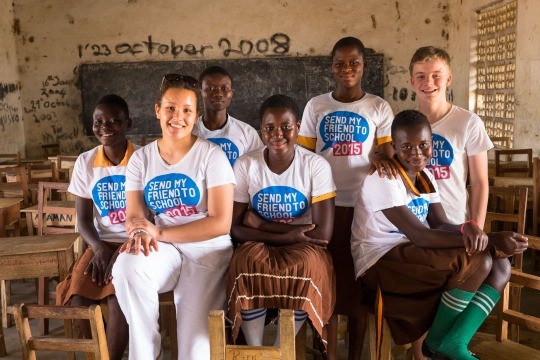 George and Emily report back from  education trip

Emily Pemberton and George Watts, both 15, from Ysgol Gyfun Plasmawr in Cardiff, have just returned from an amazing fact-finding mission to Ghana, in West Africa. As the 2015 Young Ambassadors for the Send My Friend to School campaign they were invited to Ghana to investigate progress towards meeting the Millennium Development Goal of universal primary education by the end of 2015.

You can download their diary and watch a film about their trip here.

Ghana has made good progress towards meeting this goal: 87% of children are now enrolled in primary school compared with just 60% in 2004. Emily and George travelled with the charity ActionAid to the remote region of the Upper East, where they spent time with children who are still missing out on school.

George said: “Although basic education is ‘free and compulsory’ in Ghana we learnt that there are still 440,000 children out of school. One of the boys I met was Ayabil who doesn’t go to school because he is needed to work on his father’s farm. It is simply a catastrophe, yet we found that these stories are common. What was particularly moving was that he was so supportive of his friends that do go to school. He said he “liked seeing them looking neat in their uniform and know they will have a good future”.

Emily said: “I also spent time with Lariba, an 11-year-old girl whose single, widowed mother of four struggles to feed the family and the costs of school uniform and shoes are out of her reach. Lariba accompanies her mother every morning to collect cow dung to be sold as fertilizer to local farmers. Her mother, Ayamliya told us she realizes the importance of education as a vital way out of poverty, but she can’t afford to send her children to school.”

The next day, the Young Ambassadors visited Ninkogo Primary School, where 888 pupils are taught by just five teachers, only two of which are professionally qualified.

Emily continued: “In the classroom sitting amongst the other 124 pupils I was shocked to see the complete lack of resources; tatty text books shared by at least three pupils and no posters or other learning materials.

“I was particularly impressed to meet with the Girls Club – a project set up by ActionAid. There were an inspiring group of 75 girls who meet to discuss various issues affecting their education and actively go out into their community and persuade parents to let their daughters go to school.”

The Young Ambassadors also met with officials at the Ministry of Education, the Ghanaian Teachers Union and the Global Campaign for Education in Ghana to get an insight into the challenges and policies working towards the day when every child will access the quality education that is their right.

Emily said: “Ghana has some good government policies, such as the free school shoes and grants which did fill me with confidence, but in a lot of cases, these policies aren’t yet being implemented.”

Since their return Emily and George have already made a speech to the National Union of Teachers (NUT) conference and are inspired to continue.

Emily said: “I will forever remember the children at Ninkogo primary school and it’s because of them that I’m determined to work at my role as Young Ambassador and for every other child who hopes for a better education and a better future.”

George said: “Ghana won’t reach the target of universal primary school by the end of the year but I feel passionately about putting my first hand experiences into use. We must make sure world leaders know that despite this being the deadline year, it doesn’t mean that we should stop. This year is so important, not because it is an end – but because it is another beginning.”

Philippa Dillon, Education Campaigns Manager for the Global Campaign for Education UK said: “George and Emily’s investigations paint a powerful picture of the education system in Ghana. Despite great progress, and impressive policies, too many children are still missing out on school. These stories are just a snapshot of the 58 million children around the world not getting the education they’re entitled to.

“World leaders are meeting in September to create more goals that will affect the future of these children. That’s why this is such an important year for Send My Friend to School, and we’re calling on as many schools as possible to get involved!”

The Send My Friend to School campaign is asking young people across the UK to ‘step into the shoes of world leaders’ and tell their local MPs how they would deliver a better future for the world’s children. The campaign will culminate in a Day of Action on 26 June, when MPs across the country will go back to school to hear what young people have to say. Sign up now for a free schools pack today!