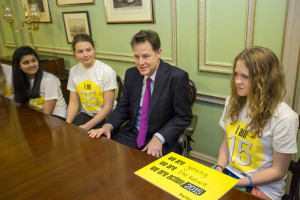 “Whatever the colour of the next Government, I want the UK to seize 2015 as a crucial opportunity to take big global decisions” said Mr Clegg.

“I have worked hard to deliver our commitments on human rights, showing global leadership on tackling poverty, and protecting our environment. I’ve met some of the inspiring young people who are leading the charge for action/2015, and they are the best possible ambassadors of a movement for change.”

According to new research, almost a billion extra people face a life of extreme poverty if leaders duck key decisions on poverty, inequality and climate change due to be taken at two crucial summits in New York and Paris later this year, with billions more continuing to face a life of hardship.

That’s the warning by more than a thousand organisations around the world which are launching a new campaign called action/2015 calling on local and world leaders to take urgent action to halt man-made climate change, eradicate poverty and address inequality.