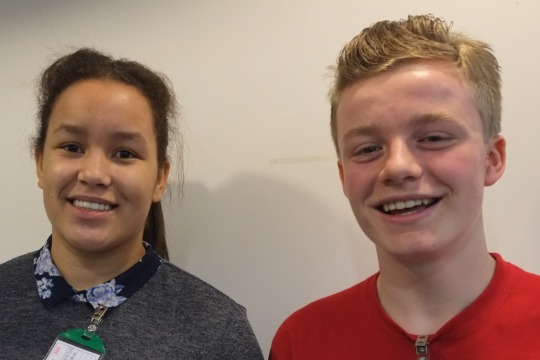 Congratulations to Emily Pemberton and George Watts, our new Young Ambassadors for the Send My Friend to School campaign in 2015. The pair, from Ysgol Gyfun Plasmawr in Cardiff, won the Steve Sinnott award, which is given each year to two passionate campaigners for education for all.

They will travel to Bangladesh on a fact-finding mission with ActionAid and the Global Campaign for Education UK to investigate progress in getting every child into school. They will meet with campaigners, charity workers and policy makers and will also have the chance to meet children who have been denied the chance to go to school to see first-hand how this traps them in poverty. They will document their trip on their Twitter feed @georgeandemily.

Emily said: “I am so excited to be a part of such a well-established campaign and cannot wait to inject my energy and flair for equality into this year’s movement.  Education is a necessity, not a privilege.”

On their return Emily & George will speak about the issues they have witnessed at events such as, to teachers at the NUT conference and to parliamentarians in the House of Commons. As Young Ambassadors they will also work to inspire their peers to join the campaign via the Send My Friend to School website, through mainstream and social media and through regional school events.

Philippa Dillon, Education Manager for the Send My Friend to School Campaign and one of the Judges said: “The standard of entries to be the 2015 Young Ambassadors was unbelievably high and they came from all corners of the UK. However, the Judges chose our winners Emily and George, for their dynamism as well as their passion and empathy for the right of every child to go to school. We were also very impressed to see what these two amazing young people had already done to raise awareness on education for all within their school and with Kevin Brennan, their local MP.”

Emily and George have also been selected to join fifteen 15 year olds as the young campaigners representing global campaign Action2015. At the launch event this week, they will meet major party leaders to ask them to take action in 2015 to ensure the right decisions are made for people and planet. For more information on what they have been doing, click here.

Get your local school to join Emily & George on the Send My Friend to School campaign – sign up now for a free schools pack today!

Get your 2020 Teacher Pack with everything you need to bring the campaign to life in your classroom.

Send My Friend to School brings together thousands of children across the UK to speak up for the right to education.
This website uses cookies to improve your experience. We'll assume you're ok with this.Accept Read More
Privacy & Cookies Policy
Necessary Always Enabled