Moving from rhetoric to action in Afghanistan 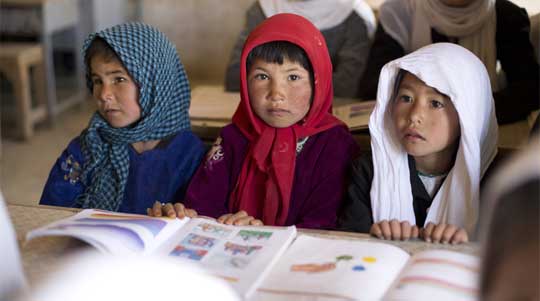 In 2001 there were just 5,000 girls enrolled in education in Afghanistan. Today there are 2.2 million. It’s a huge achievement, but there are still half a million Afghan girls waiting to have a chance to go to school.

We met Afghanistan’s Minister of Education, Farook Wardak, during his recent visit to London. He is keen to keep up the momentum and progress to date which has seen the reopening of 700 Afghan schools that were previously closed due to conflict.

However, there are still many challenges facing the country. Poverty and years of conflict have deeply impacted on children and their families.  Girls face particular barriers.  Even now, over a decade after the Taliban – who restricted girls’ education – fell from power, girls face significant risks on their journey to school, and find a lack of basic facilities, such as toilets, when they get there.

Despite these challenges, progress made in Afghanistan also shows that much can be achieved with the will and resources for change.

Mr Wardak stressed the need for international support to education to be prioritised.  He highlighted the importance of the support for education offered through bodies such as the Global Partnership for Education (GPE) – a global funding initiative working with governments, civil society and international organisations and other partners in around 60 developing countries.

Mr Wardak spoke of the importance of GPE’s focus on difficult to reach areas of the country, on girl’s education, and on ensuing that policy decisions consider the needs of the most marginalised children, including those with disabilities.  Above all, a “bottom up approach” starting with the local community is the best way to bring about positive change, because “no development intervention is sustainable unless you work with the local community”.  He praised GPE for supporting this approach in Afghanistan.

To ensure that progress continues and that important gains are not lost, ongoing support from governments and leaders around the world is critical.  In the Minister’s words, there is a pressing need to “move from rhetoric to action”.

This message has a particular resonance in 2014 when leaders are being invited to come together and pledge support for the Global Partnership for Education’s fundraising replenishment in summer 2014. It is hoped that commitments totalling £2.5 billion will be made so that there will be a chance to realise the promise made by world leaders in 2000 to ensure education for all the world’s children.