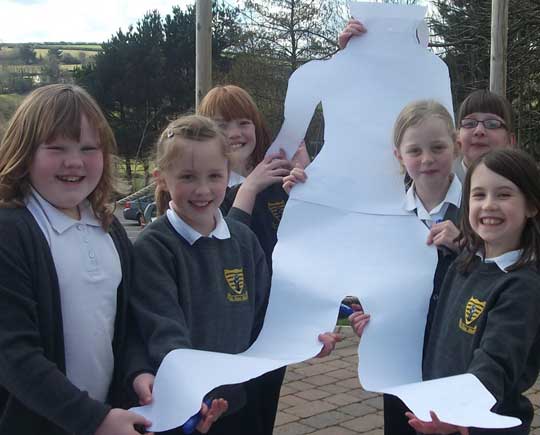 On Friday 21st June, St Mewan Community Primary School held a Global Issues Day for 2013 – organised and run by their Global Issues Club with support from the Year 5 Classes.

During the week, the Global Issues Club led an Infant and a Junior assembly where they explained about the projects they had been taking part in this year, and where the Global Issues day money would be going. They also created an African Jigsaw map!

As part of this campaign, the club drew around their teacher, Miss Willcock, to make a teacher template, and designed a ‘Perfect Teacher’ with qualities such as a big smile, an even bigger brain (for all their knowledge), a football (to show they were sporty), and a microphone (to show they were musical), amongst many other skills they though a perfect teacher would have!

During the week classes designed their own perfect teachers to be sent to their local MP.  The children learned about an orphanage in Mozambique which the school supports and where their teacher Miss Willcock will be going to work in the summer.  In class, children also learned about the lifestyle of children from different countries and how this compared with their own lives.

On the day itself, the Global Issues Club and Year 5 children worked tirelessly to sell cakes and run face painting, nail painting, sports, stocks and games to raise money for the charities they support.