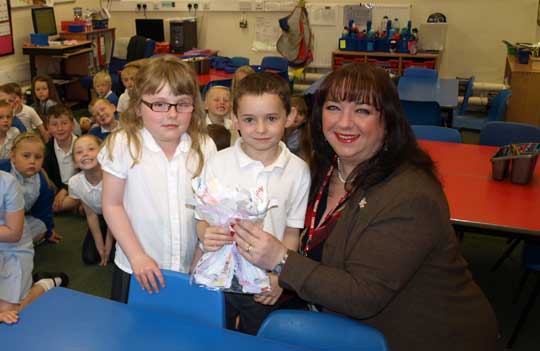 Pupils at John F Kennedy Primary School in Washington met their MP, Sharon Hodgson and talked about the 1.7 million professional teachers needed to get every child worldwide into the classroom.

Mrs Hodgson is one of hundreds of MPs taking part in the campaign, which involves thousands of young people across the UK.

While at John F Kennedy primary, Mrs Hodgson took part in an assembly and collected the cut-out teachers, made and coloured in by the children, which she will deliver to the Prime Minister to remind the UK Government of its promise to make sure all children have access to primary education by 2015.

Mrs Hodgson said: “The Send My Friend to School campaign is a really good way of engaging pupils with the challenges that children their age around the world face in accessing the most basic of education.

“I always enjoy speaking to JFK pupils about their desire to see every child have the opportunities that they do.

“Just as it is anywhere in the world, the key to a good education is having a good teacher, but in many countries there just aren’t enough to meet demand.

“This year’s theme is therefore an important strand of the ongoing campaign to educate every child in the world.”