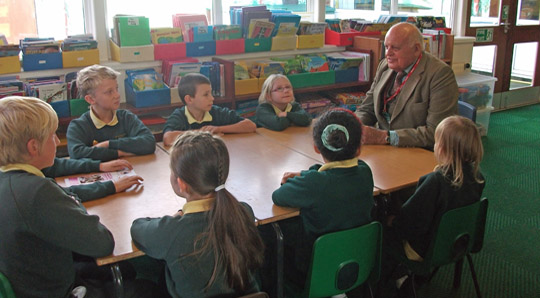 At the end of last academic year two members of the School Council wrote to the local MP, Sir Peter Tapsell, to ask what this Government were doing to support the deadline of all children in education by the year 2015. With this letter were sent ‘Going for Gold’ medals, drawn by the children in the school to support the Send My Friend campaign.

We received a reply and Sir Peter came to visit our school on Friday 12th October 2012. He met with the School Council and answered our questions. He has promised to ask the Education Minister about the matter and get back to us with a reply.

Throughout the visit, we asked questions about being an MP and also told Sir Peter how sad we are that the school’s own sponsored child in Cambodia is also not in education currently due to her father being sick and her mother working. This has made the campaign hit closer to home and we are now more eager than ever to find out what is being done by the Government to help such children.