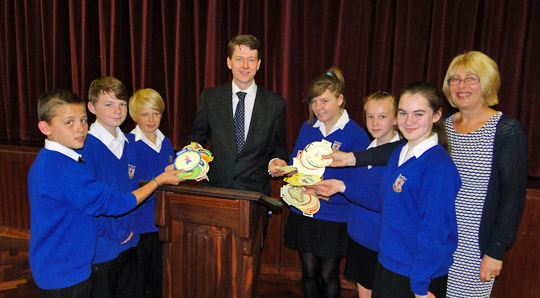 On Friday 22nd June Robin Walker MP came in to tell us about his job and what it’s like to be an MP.

Robin described how Britain was one of the wealthiest countries and is helping to reduce the amount of poverty in developing countries by making donations of overseas aid. He talked us through how huge his responsibility was, being an MP, and also why he chose to become one.

He said that he had not expected to be an MP from a very early age, as he saw the debates on the TV and didn’t see the point in everyone shouting at each other. However as he grew up he soon realised that being an MP was rewarding because if you had a point of view you could then share and influence some degree of change.

He discussed with us about reaching the Millennium Development Goals as part of an answer to a question. These are due to be reached in 2015 and include the opportunity for all children to complete primary education. This is something that we tend to take for granted in this country but that in many poorer countries it is a privilege not afforded to everyone but to those who can afford the fees for schooling, uniform and books.

Before Robin Walker’s visit, some pupils had the chance to create some decorative medals and write on the back our views of things, so Robin would know what we, as a community, feel about things.

Overall, everybody had a very interesting hour and learnt a lot about what it is like to be a Member of Parliament.