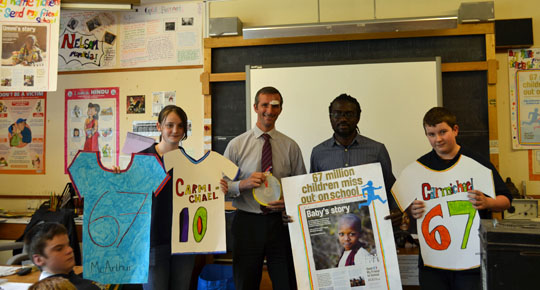 Kirkwall Grammar students invited their MSP Liam McArthur to the school to discuss the need for education for all.

Pupils and staff at Kirkwall Grammar School in Orkney worked hard to raise funds and awareness of the need to improve access to education for the 67 million children around the world who currently miss out.

Member of the Scottish Parliament Liam McArthur attended a special event to receive the gold medal messages and special Olympic jerseys the children had designed to highlight the need for world leaders to ‘Go for Gold!’ for education.

He also drew a raffle organised by the school to raise funds for education, with first prize a tasty African meal cooked by Religious, Moral and Philosophical Studies teacher Mr Ogbhemhe. Said Mr Ogbhemhe, “Of the millions of children not in school, 10 million come from my home country of Nigeria.”

S3 Student Sophie Balcombe opened the event with a speech highlighting the scale of the problem. Fellow S3 pupil, Craig MacLennan, emphasised the importance of using this year to remind world leaders of their commitments to the UN Millennium Development Goals. “This summer the world comes to the UK for the Olympics and it is a great opportunity for us to remind world leaders of the promise they made in 2000: to get every child in school by 2015. We are asking world leaders to Go for Gold. We have done this by designing gold medals.”

Receiving the medals and jerseys, Mr McArthur told the audience he would “take them back to the Scottish Parliament and make sure that [his] fellow MSPs and MPs realised that the determination to see the Millennium Development Goals achieved is as strong today as it has ever been in the young people of Scotland”.