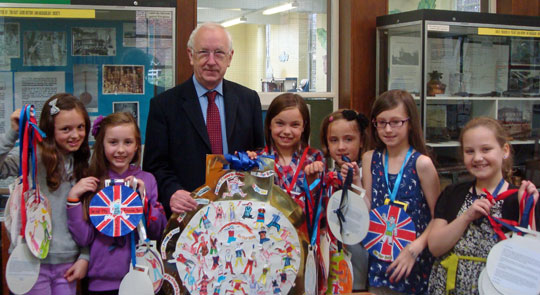 Pupils from Austhorpe Primary, in Leeds, visited their MP at his surgery to deliver their Go for Gold messages.

Year 4 pupils at Austhorpe Primary School in Leeds presented their own assembly to the rest of their school, spreading the word about the education issues faced by developing countries.   They were inspired by studying Kenya as part of their Geography curriculum, and having completed a workshop delivered by an ActionAid Visiting Teacher, decided to look at how they could help push for education for all.

The pupils made their own Go For Gold medals and wrote letters to their local MP urging him to convey their concerns to Mr David Cameron himself. They also held a Toy and Book sale, raising in excess of £100 for ActionAid which will help the organisation to address some of the problems encountered by children around the world.

Representatives from the class then met with their local MP, Mr George Mudie, who promised to deliver the medals to No 10. He was so impressed by the school’s efforts that he also, very generously, made a contribution to the total amount raised from the Sale. A huge thank you to Mr Mudie and to the pupils at Austhorpe Primary School for their hard work!